Be the first to review this product
Special Price $54.97 Regular Price $59.97
In stock
SKU
VGbTeleStratStarPackage
Add to Compare
Email

Save $5 by purchasing this package, which includes includes Fender Telecaster and Stratocaster: The Story of the World's Most Iconic Guitars ($40.00) and Ultimate Star Guitars: The Guitars That Rocked the World, Expanded Edition ($19.97).

Celebrate of the history and significance of both the Fender Telecaster and Stratocaster for the company's 75th anniversary in this combined edition of Dave Hunter's two best-selling books!

The Fender Telecaster, created in Leo Fender's Fullerton, California, workshop and introduced in 1950, is a working-class hero and the ultimate blue-collar guitar. It wasn't meant to be elegant, pretty, or sophisticated. Designed to be a utilitarian musical instrument, it has lived up to that destiny. In the hands of players from Muddy Waters to James Burton, Bruce Springsteen to Joe Strummer, the Telecaster has made the music of working people—country, blues, punk, rock 'n' roll, and even jazz.

Fender’s Stratocaster is arguably the number-one instrument icon of the guitar world. When introduced in 1954, its offset space-age lines, contoured body, and three-pickup configuration set the music world on its ear—it was truly unlike any guitar that had come before. In the hands of the world’s most beloved players, such as Buddy Holly, Eric Clapton, Ike Turner, and, yes, Jimi Hendrix, the Stratocaster has since become a popular instrument of choice among rock, blues, jazz, and country players and, not coincidentally, is also one of the most copied electric guitars of all time.

In this authoritatively written, painstakingly curated, and gloriously presented combined edition to celebrate Fender's 75th anniversary, author Dave Hunter covers both of the guitar’s histories from concept, design, and model launch through its numerous variations and right up to the present. The story is richly illustrated with archival images, musicians in action, studio shots, memorabilia, and profiles of over 50 Tele and Strat slingers through the ages.

With its unprecedented level of detail and stunning visuals, Fender Telecaster and Stratocaster is the only book tribute worthy of the world’s two greatest guitars.

First published in 2010, expanded in 2017, and now available in a sleek paper-over-board format, Ultimate Star Guitars is the first illustrated history of iconic guitars and their owners—featuring more than 140 guitars and 120 guitarists in all!

Where other best-selling guitar histories look at the rank-and-file models, Ultimate Star Guitars is unique in profiling the specific favorites of famous players—oftentimes million-dollar babies, such as the 1968 Stratocaster that Jimi Hendrix burned at Woodstock and which sold at Sotheby's in 1993 for $1.3 million. Among the stars and their guitars:

From twangy country to scorching metal, from full-throttle punk to sophisticated jazz, and from gut-punch blues to lo-fi indie rock, Ultimate Star Guitars is illustrated with performance and candid photography of the artists with their star guitars, relevant memorabilia, and more often than not, studio shots of the guitars or signature models based on them. It's an information-packed visual feast for guitar enthusiasts!

*Pay no shipping in the U.S. or discounted shipping outside the U.S. 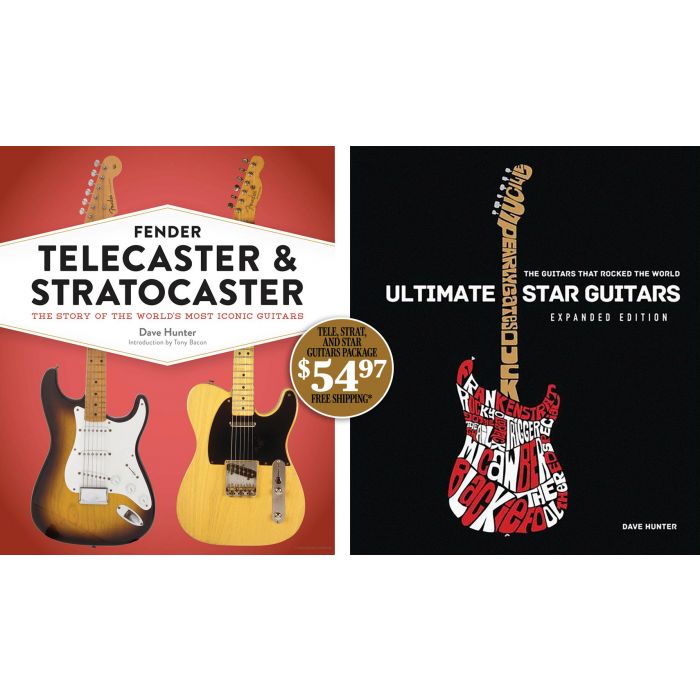