Be the first to review this product
Special Price $99.97 Regular Price $109.97
In stock
SKU
VGbDaveHunterCollection
Add to Compare
Email

Save $10 by purchasing this package, which includes includes PRE-ORDER: Fender 75 Years ($50.00 This book ships seperatly the week of September 14th, 2021. Delayed from June 8th), Fender Telecaster and Stratocaster: The Story of the World's Most Iconic Guitars ($40.00) and Ultimate Star Guitars: The Guitars That Rocked the World, Expanded Edition ($19.97). Fender Tele and Strat and Ultimate Star Guitars ship immediately.

You know Dave Hunter from the pages of Vintage Guitar. Now you can join him as he traces Fender’s entire history to the present. From the company’s first instrument – a lap-steel guitar produced in 1946 – to founder Leo Fender’s groundbreaking early six-string “Spanish-style” guitar designs like the Esquire that set the standard for the electric guitar explosion to follow. All the innovations and landmark models are here, as well as legendary players who became synonymous with Fender instruments across musical genres. Authoritatively written and lavishly illustrated, Fender 75 Years is the officially licensed anniversary celebration of the company and its legendary instruments.

It’s the definitive look at the Fender’s first three-quarters of a century and a must-have for the shelf of any guitar enthusiast.

Celebrate of the history and significance of both the Fender Telecaster and Stratocaster for the company's 75th anniversary in this combined edition of Dave Hunter's two best-selling books!

In this authoritatively written, painstakingly curated, and gloriously presented combined edition to celebrate Fender's 75th anniversary, author Dave Hunter covers both of the guitar’s histories from concept, design, and model launch through its numerous variations and right up to the present. The story is richly illustrated with archival images, musicians in action, studio shots, memorabilia, and profiles of over 50 Tele and Strat slingers through the ages.

With its unprecedented level of detail and stunning visuals, Fender Telecaster and Stratocaster is the only book tribute worthy of the world’s two greatest guitars.

First published in 2010, expanded in 2017, and now available in a sleek paper-over-board format, Ultimate Star Guitars is the first illustrated history of iconic guitars and their owners—featuring more than 140 guitars and 120 guitarists in all!

Where other best-selling guitar histories look at the rank-and-file models, Ultimate Star Guitars is unique in profiling the specific favorites of famous players—oftentimes million-dollar babies, such as the 1968 Stratocaster that Jimi Hendrix burned at Woodstock and which sold at Sotheby's in 1993 for $1.3 million. Among the stars and their guitars:

From twangy country to scorching metal, from full-throttle punk to sophisticated jazz, and from gut-punch blues to lo-fi indie rock, Ultimate Star Guitars is illustrated with performance and candid photography of the artists with their star guitars, relevant memorabilia, and more often than not, studio shots of the guitars or signature models based on them. It's an information-packed visual feast for guitar enthusiasts!

*Pay no shipping in the U.S. or discounted shipping outside the U.S. 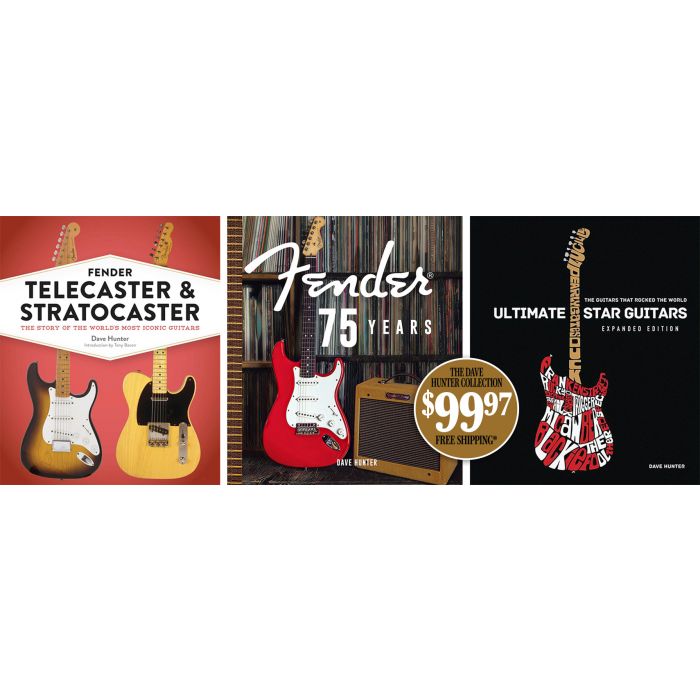