Be the first to review this product
$8.97
In stock
SKU
VGiAug2022
Add to Compare
Email

One of the most-recognizable guitarists of the early ’70s, Jeff “Skunk” Baxter was the Tele-wielding rocker in Steely Dan and has worked a lifetime of A-list sessions. His new album, The Speed of Heat, is packed with eclectic synergy.

By the early ’60s, Gretsch was riding high with models endorsed by Chet Atkins; one of them is an icon, another faded quickly. Few, if any, were like the ’62 Country Gent Custom.

While scanning a VG ad in 2009, Billy Soutar spotted a 1936 Gibson L-7, “Custom... with factory Charlie Christian pickup.” The word “rare” especially caught his attention, and he was soon taking a long drive to buy it.

Les Paul’s name on the headstock of Gibson’s debut solidbody was the biggest guitar-star endorsement of its time. The GA-40 amp came with it, offering tone players still dig today.

“Pop ’N Hiss” revisits the challenges faced by Lynyrd Skynyrd in making its first album, Pronounced ‘Leh-Nerd Skin-Nerd’, while Wolf Marshall’s “Fretprints” examines the full-tilt boogies of Foghat. Dan Forte’s “Check This Action” reminds us why Eric Burdon and the Animals were a landmark act, and Dan Erlewine guides a high-school student through a guitar build.

It’s all in the August issue of Vintage Guitar! 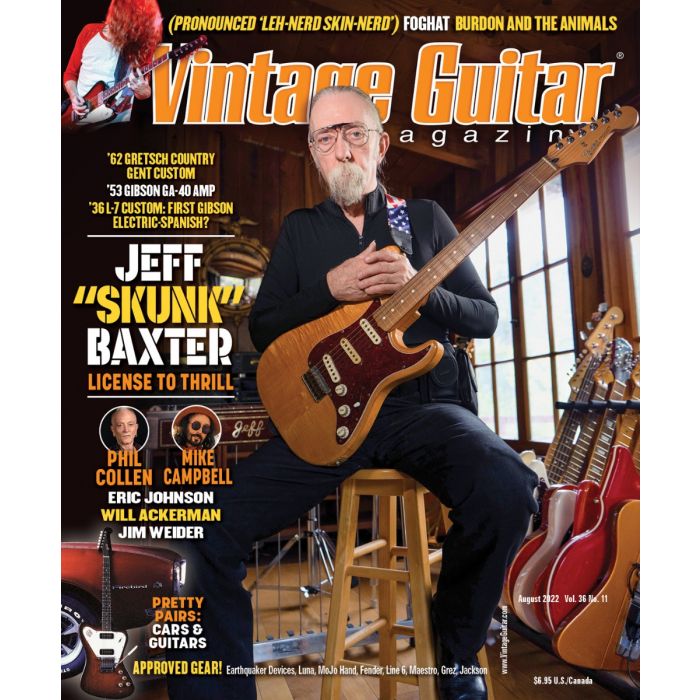