Be the first to review this product
$8.97
In stock
SKU
VGiDEC2021
Add to Compare
Email

The longest-tenured guitarist for Ozzy Osbourne, for 20 years, Zakk Wylde has also led Black Label Society, which has two new albums forged with his favorite “fiddles.” Samantha Fish talks about her new album, the latest step in a career marked by constantly evolving sound, style, and skill.

Cross a helicopter with a Martin and you get Ovation guitars – and the Adamas II is its ultimate expression. The Bell 30 RV amp was built for accordionists, but also made sounds a guitarist could love. Live-music fans who once roamed South Florida’s music scene might recognize the ’67 Rickenbacker 360/12 in this month’s “Classics.”

We talk new music with Mark Tremonti, Joanne Shaw Taylor, Seth Lee Jones, Dave Murray, Naia Izumi, and Chris Tapp, then tell the tale of how Jerry Kennedy’s ’53 Martin 00-18 was returned to him after 70 years. There’s also a look at the National Guitar Museum’s “Medieval to Metal” exhibit.

On the 50th anniversary of its release, “Pop ’N Hiss” recounts the stories behind – and impact of – Led Zeppelin’s IV, Wolf Marshall’s “Fretprints” digs into the career of unheralded jazzer Billy Bean, and Dan Forte’ s “Check This Action” column keys on The Jimmie Vaughan Story box set.

It’s all in the December issue of Vintage Guitar! 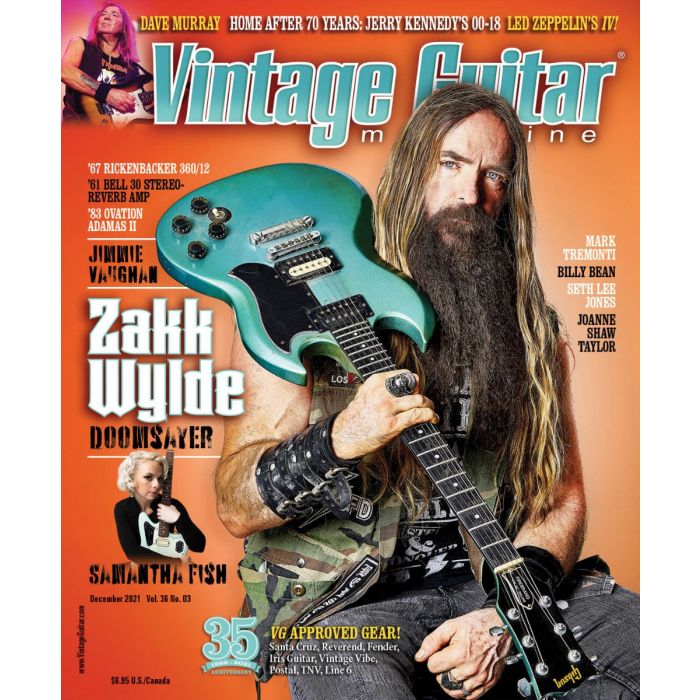