Be the first to review this product
$8.97
In stock
SKU
VGiDec2022
Add to Compare
Email

GA-20’s Matt Stubbs is a disciple of Johnny “Guitar” Watson, Earl Hooker, and the guitar Kings, while Pat Faherty’s influences are more-modern. Their new album, Crackdown, reaches back while moving the blues forward.

Also dropping by to discuss their latest music are Richie Kotzen, Jeff Berlin, Mike Morgan, Steve Knight, Ewan Currie, and Grant Geissman. Wolf Marshall recalls the legendary work of Toy Caldwell, while “Pop ’N Hiss” examines how Black and Blue stands out in the catalog and history of the Rolling Stones.

Reid Farrell bought a used Fiesta Red ’59 Tele for $125, then used it and later sold it to Billy F Gibbons, who used it on two of ZZ Top’s biggest hits. “Classics” tells its story.

B.C. Rich closed the 20th century with its version of a “see through” guitar. In case you’ve forgotten, here’s the tale of the Acrylic Warlock.

Orange amps are known for their raucous British sound. Created when amps were huge and men were men, the OR80 Combo screams bell-bottomed rock style and attitude. Here’s the how and why.

Leo Mazow’s vision for an exhibit at the Virginia Museum of Fine Arts stemmed from the guitar’s overwhelming popularity. Given its rich history, he knew it would make for an engaging exhibition. We knew it’d make for a cool magazine spread!

It’s all in the December issue of Vintage Guitar! 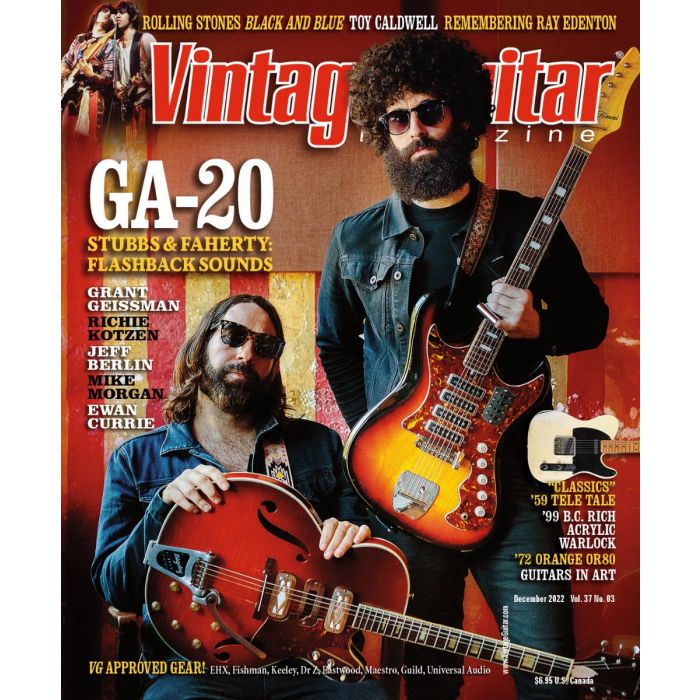