Be the first to review this product
$8.97
Out of stock
SKU
VGiJan2023
Email

The Grammy-nominated sisters in Larkin Poe are rising to new heights with an album that mixes Southern rock, blues, and deft slide guitar in songs that speak to life’s joy and struggles. And we take an exclusive first look at Megan Lovell’s new Beard Electro-Liege lap steel.

Kurt Hendrick’s funky solidbodies stood apart in the hands of Billy Gibbons, SRV, and other super-high-profile stars. They also propelled him through a fascinating, well-traveled career as an instrument designer. Here’s his story.

“Classics” reveals the story of Jay Mitzner, who at 13 was not only passionate about the guitar, he was good on it. Spurred by his guitar teacher, a trip to Sam Ash landed a used ’53 Les Paul in Jay’s hands, and it played a major role in his life.

After producing iconic tube amps, Vox leaned into ’60s solid-state technology. The move ultimately led to its implosion, but some creations from that transitional period – like the V-14 Super Beatle –  are classics.

As always, we talk to select artists about their latest releases. This month, we catch up with Gene Simmons, Phil Keaggy and Mike Pachelli, Eli “Paperboy” Reed, Julian Lage, Kristian Borring, Daniele Gottardo, and Benjamin Kushner

It’s all in the January issue of Vintage Guitar! 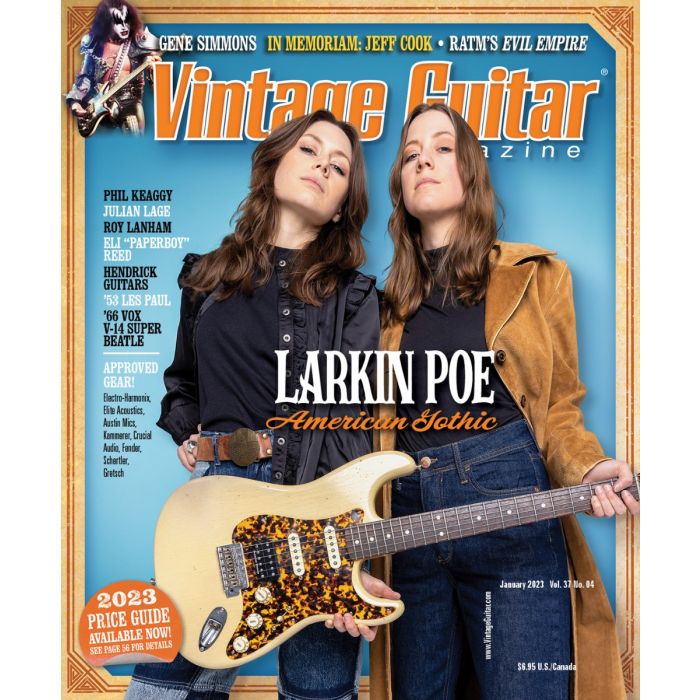