For many players, the Fender Bassman is a surefire go-to amp. We take a look at the circuits and formats that have worn the name. We also tell the story of the Esquire used by Clarence “Gatemouth” Brown. Then, we speak with John Oates about his incredibly special Guild F-30, and offer our best-in-the-business profiles of a ’28 Weymann Model 848 and the Goya Rangemaster 116. We talk new music, new guitars, and the latest goings-on with Jimmie Vaughan, Al Di Meola, Michael Bruce, Jonathan Wilson, June Millington, and Tommy Skeoch. Dan Forte delves into Clapton on film, Wolf Marshall tells the story of rocker John Sykes, Peter Kohman continues his exam of the Gibson EB-3, Dan Erlewine shows us his fix a broken Strat vibrato bar, and Will Kelly takes two DIY neck-through guitar kits and makes a doubleneck! Update your listening with help from our music reviews, including new stuff by Led Zeppelin, Al Di Meola, Jack White, Eric Johnson, Tinsley Ellis, Barney Kessel, John Prine, Joe Bonamassa, John 5, Toto, and more. If it’s time for something new in the jam room (and when isn’t it?), be sure to read our no-bull reviews of VG Approved Gear. There are a million reasons to read the July issue, available now! 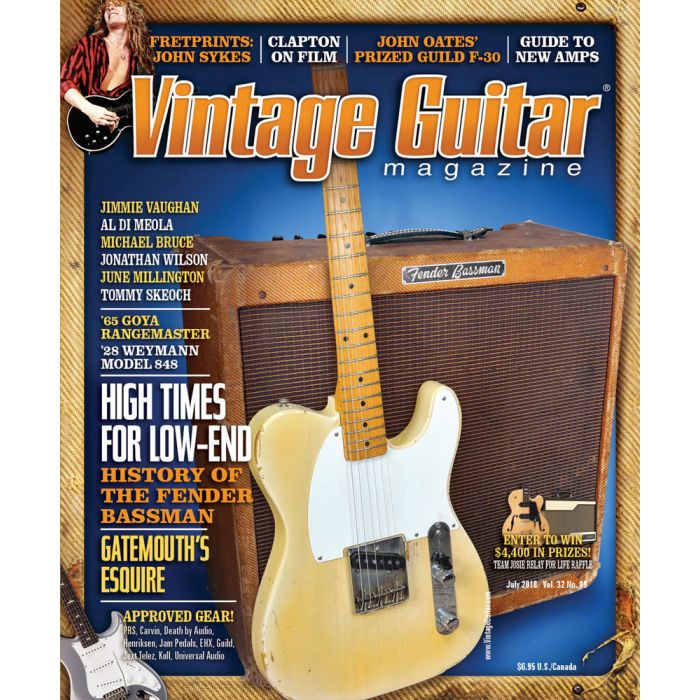 Skip to the beginning of the images gallery
Reviews 2
Write Your Own Review
Copyright © 1986-2020 Vintage Guitar, Inc. All rights reserved. www.VintageGuitar.com