Be the first to review this product
$8.97
In stock
SKU
VGiJUL2021
Add to Compare
Email

Lauding the musical heritage and traditions of its home state, Blackberry Smoke’s new album, You Hear Georgia, is a rootsy, thematic effort. We speak to Charlie Starr to learn how it was made. We also chat with guitar/violin/mandolin master Mark O’Connor about his ’45 Martin D-28 herringbone and new album. Others talking about their latest work are Steve Cropper, Ian Crichton, Jane Getter, Jesse Aycock, Ally Venable, and Al Stewart. Plus, Wolf Marshall tells us why Pat Martino is a redefined jazzman.

As always, VG delivers the best guitar stories, like the one about why Gretsch moved quickly to launch the 6128 Duo Jet in 1953, or the truth behind the Marshall Major. And few know about the “Hawaiian Gibson,” which had a nut and bridge set for “Spanish” play. But that wasn’t its most-curious element!

Wolf Marshall’s “Fretprints” looks back at the jazzy side of Stevie Ray Vaughan, while “Pop ’N Hiss” flashes back to the underappreciated brilliance of Brian Setzer’s The Knife Feels Like Justice. In “Check This Action,” Dan Forte reminds us why John Mayall is a blues god in the guitar universe.

Because your ears are itchin’ for new guitar tunes, you’ll definitely dig this month’s “Hit List” and our thoughts on the latest by Cheap Trick, Blackberry Smoke, Tony Joe White, Black Sabbath, Jorma Kaukonen, Southern Culture on the Skids, and many others.

Our “Approved Gear” review staff give you information you can use; read their thoughts on DryBell’s The Engine, the Tech 21 SansAmp Classic, the Strymon Iridium, KW Cabs ST-220 SSB, Logan’s Telemaster, the Ramble FX Twin Bender, D’Angelico’s Excel 59, and the Martin D-13E Ziricote.

It’s all in the July issue of Vintage Guitar! 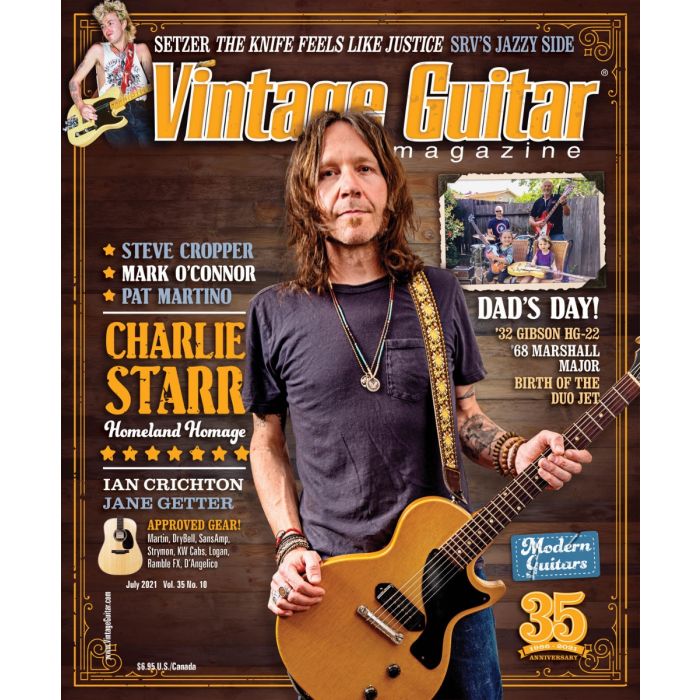