Be the first to review this product
$8.97
In stock
SKU
VGiJUN2021
Add to Compare
Email

Young bands playing bombastic guitar rock often trod to gain acceptance. Jake Kiszka and his bandmates in Greta Van Fleet have dealt with comparisons and criticism, but shrugged it off while creating their new album, The Battle at Garden’s Gate. We chat with him. Our discussion of new music continues with Tony Iommi, Joanna Connor, Jorge Garcia, Orianthi, Les Sabler, Tagore Grey, and Roine Stolt.

Few instruments command attention like a vintage Les Paul Standard. But a guitar like the Sebastian ’Burst, heard worldwide on classic hits by the Lovin’ Spoonful, will always stop the show.

Developed as twilight set upon the U.S.S.R., the Sovtek MIG-50 evokes a Red Army ethos, with its military components and other quirks. Its tone crosses traits of a Bassman with a plexi, but it’s really much more!

Maybe it’s a nostalgia talking, but nearly every player wishes they still had their first guitar. Rob Harrelson still plays the Kay 1160 he was gifted as a kid and the ’64 Precision Bass that accompanied him through college and in the Navy during Vietnam. This month’s “Classics” tells his story and offers more delicious eye candy in the form of two rare Rickenbackers.

Wolf Marshall’s “Fretprints” column details the greatness of superpicker Tony Rice, while Dan Erlewine replaces the tuning keys on a ’62 Gibson ES-335, and our “Pop ’N Hiss” vintage-vinyl revisit delves into the proto-prog of the Vanilla Fudge album Near the Beginning.

It’s all in the June issue of Vintage Guitar! 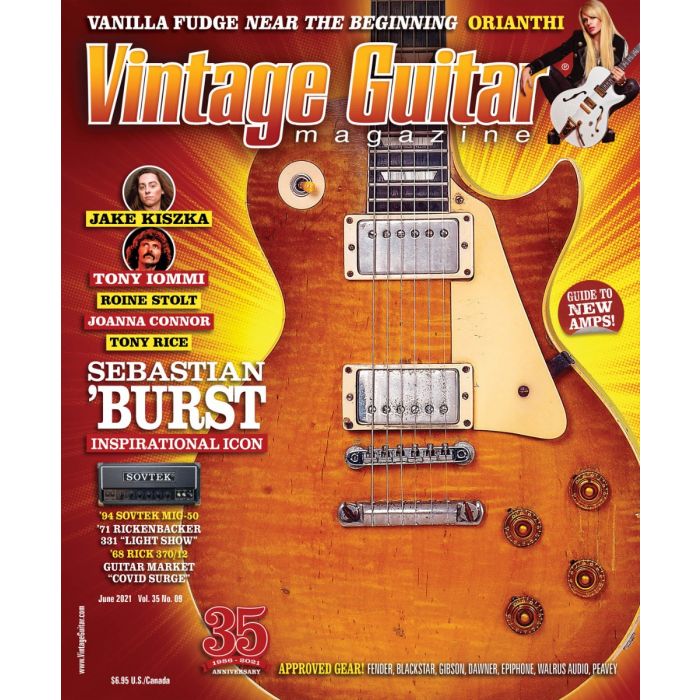