Be the first to review this product
$8.97
In stock
SKU
VGiNOV2021
Add to Compare
Email

For nearly 40 years, Brad Gillis has wailed memorable leads for megastars Night Ranger. With a new album, the band is back on tour – and Gillis is back to seeking vintage guitars in all corners of the globe. We talk more new music wtih Eric Bibb, Rick Vito, K.K. Downing, Bobby Eli, Guy King, Pasquale Grasso, and Kenny Brown while Bryan Bassett digs into his two decades (and counting) in Foghat.

This month’s instrument deep dives start with the ultra-rare Krebs Tape Echo Amplifier, from a time when Fender wasn’t the only Leo making guitars and amps in SoCal. Peter Stuart Kohman continues his fascinating look at United Guitar Corporation, whose tale has been, until now, lost in obscurity. We also explain why Fender’s Musicmaster and Duo-Sonic are great collectibles despite having been dismissed by certain snooty collectors. And we tell the story of Billy Soutar’s very personal 1969 Les Paul Personal.

It’s all in the November issue of Vintage Guitar! 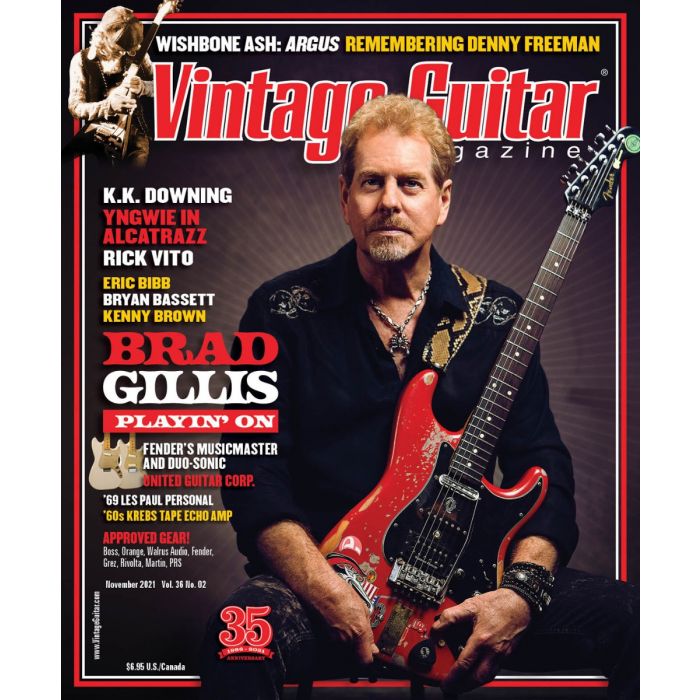