Be the first to review this product
$8.97
In stock
SKU
VGiNov2022
Add to Compare
Email

Psych-blues maestro J.D. Simo is the wizard behind the guitars heard throughout the feature film Elvis. The gig required him to embody the sounds of Scotty Moore, James Burton, Hank Garland, Tommy Tedesco, B.B. King, and others. Simo tells us why it was more fun than a barrel full of monkeys.

Despite the way collectors and dealers bandy the term “lawsuit guitars,” real-world examples are few. One time it did happen was triggered by the Vox Symphonic Bass.

All tweed Fenders are lauded, but the V-Front 5B4 Super might be the most iconic. This one was also the compatriot of a player known for his tone.

Like most baby-boomer kids, Vern Juran was into slot-car tracks and bikes with banana seats and sissy bars. He also loved guitars, and this Harmony Stratotone sent him down the path. After being traded 50 years ago, it recently returned to him.

A trade-show curiosity, Höfner’s Fledermaus Gitarre may be pedestrian in terms of materials, but its design was a radical departure. Today, it entices aficionados and collectors.

Blues aficionados recognize Pee Wee Crayton as a legend. Wolf Marshall’s “Fretprints” tells the story of “The little man with a big sound,” who dominated the charts briefly in the years between T-Bone Walker and B.B. King.

As they started studio work in 1976, Thin Lizzy was in trouble. Their label wanted a hit   –and “The Boys Are Back in Town” wasn’t on the short list for Jailbreak. With help from Scott Gorham and Brian Robertson, “Pop ’N Hiss”  tells what changed their minds.

Because you’re constantly on the lookout for good new music, our “Hit List” review staff tells you why the latest from the Doobie Brothers, Pink Floyd, Talas, Kris Kristofferson, Lari Basilio, Kirk Fletcher, Six by Six, Happy Traum, and others is worth a listen.

It’s all in the November issue of Vintage Guitar! 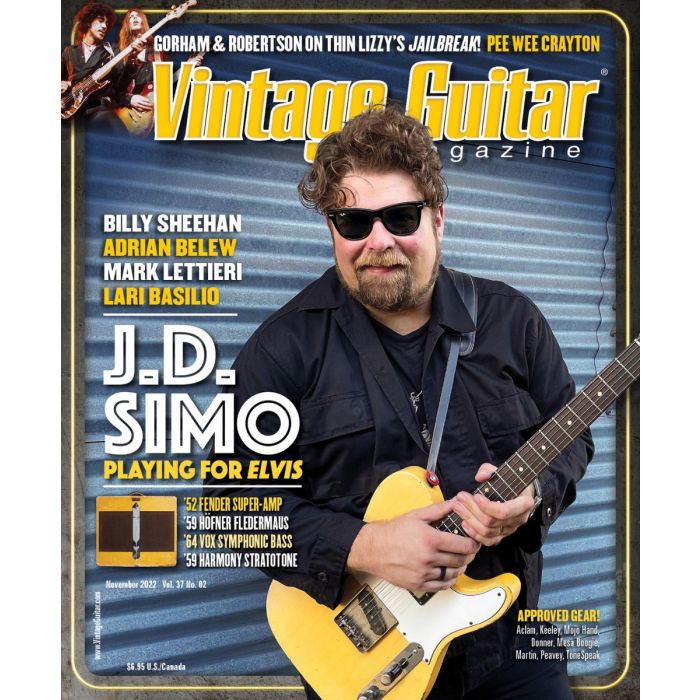